I’ve written four short stories to date and am always pumping out more for different anthologies throughout the year! You can find out more about those works here!

East of the Bronx from A Twist of Fate

When Alma Keats responds to a mysterious advertisement promising a rent-free apartment and a considerable amount of money in return for her companionship, she thinks she might change her circumstances.

Sick of her father making sacrifices to for the well being of his children, she realized this opportunity could be the answer.

There’s just a couple of catches. She can’t leave the sky-rise Bronx apartment or have any contact with the outside world. And her companion, wealthy businessman Jack Valemont? She’s forbidden to look at him until the one-year contract is up. If she can survive the isolation and the temptation to see her companion’s true face, she’ll walk away with 2 million dollars and a new life for her family.

The Eleventh Hour from Chasing Fireflies

It could be the best or the worst day of his entire existence, but one thing is for certain, it’s the eleventh hour and he has a choice to make. Remain her friend, or convince her that there’s more.

Ring Me from London Calling

When a wrong number turns into the lifeline he never knew he needed, James Declan is forced to come to terms with his demons. Can Claire, the girl on the other end of his mobile, be his salvation, or is she destined to become his biggest mistake yet?

Carly and Micha are best friends. They have been since the sixth grade when Micha moved to the sleepy southern town of Corwin, Tennessee. For most of their teenage lives, they spent their time trying to get out. When they finally manage to do so, first love, betrayal, asinine exes and a heart-rending loss put their bond to the test. Will a trip back to Corwin for Christmas be just the shove they need to confront their past and make a better future? 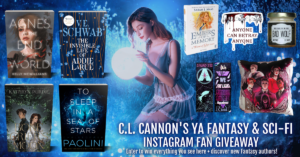