Series: The Rite of Wands, Book 1

One boy…one Rite… And a world of deadly secrets that could change the course of history—forever.

And so begins the tale of Mierta McKinnon. When a horrible fate reveals itself during his Rite of Wands ceremony, he must find a way to change not only his destiny but also the land of Iverna’s.

Forbidden from revealing the future he foresees to anyone, he is granted a wand and his magical powers, but still must master the realm of magic in order to save himself and those he loves.

But Mierta is not the only one with secrets…especially when it’s impossible to know who to trust.

Mackenzie is a multi-award-winning author of the YA Fantasy series The Rite of Wands, published by BHC Press, which has caught the attention of Doctor Who and Harry Potter fans worldwide. Readers agree that Mackenzie has crafted a robust tale of secrets, mystery, and uncertain destiny that rivals the works of Tolkien, Lewis, and Rowling.

A storyteller at heart, she loves to inspire the imagination. Mackenzie makes her home in Mount Morris, Michigan, where she is currently penning her next adventure.

Chris Walker-Thomson is a versatile British actor, voice artist and impressionist based in Chelmsford, Essex. He is most known for his highly-acclaimed portrayal of Doctor Who actor Patrick Troughton in various productions – as well as being a well-established character actor. Chris is also an exceptional impressionist, voice over artist and comedy performer.

I received this audiobook as part of my participation in a blog tour with Audiobookworm Promotions. The tour is being sponsored by Mackenzie Flohr. The gifting of this audiobook did not affect my opinion of it.

Let’s talk about the thing that drove the rating down for me, that would be the narration. I really tried to like the narrator, but at times it felt like he was trying a bit too hard, and at others his voice was monotonous. It really distracted me from the story to the point that I had to stop listening about half-way through and just continue reading on my Kindle.

The story itself is very imaginative. You can tell that Flohr spent a lot of time developing this world with love and care.

I’ve seen mention in other reviews that Orylnd’s dialect threw some readers. However, I really enjoyed it and wonder if has anything to do with the speech each person is used to hearing regularly.

Flohr is terrific at describing her beautiful settings in detail, making them come to life within your mind.

The plot of this book is very fast paced, and sometimes that left the problem and resolution to that problem feeling a bit convoluted. A little more development of the ideas within the dialogue or actions would make these seem more natural.

There is a time jump, and I have to say, I really enjoyed seeing how each character changed and matured into their adult selves. I think it leaves a wonderful opportunity to do a short story or novelette with the missing time for hardcore fans.

Overall, I enjoyed the book but not the audiobook.

Author MACKENZIE FLOHR’s Dream Cast for The Rite of Wands

From the Heart of a Bibliophile Lair

Burning Out the Masses

What Is That Book About

➜Sign up as a host here 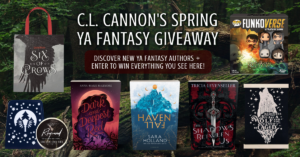